So since the community accepted the 25% increase in supply I’m actively thinking how the community can be remedied vs the potential token dilution. Since the teams goal is to engage the community and let them actively participate I’m proposing here a simple question:
Would you be interested in STMX implementing a burning mechanism? Y/N

This should be a basic question where it should be almost like an open interest question but under 1 condition:

*“Simon Effect” is a made up term by me where I define a situation where a lot of the community is influenced by the opinion of Simon because of the trust in him.
This vote should only reflect your personal opinion about the burning mechanism.

If you are not familiar with the term and it’s effects I will just post here a simple article: 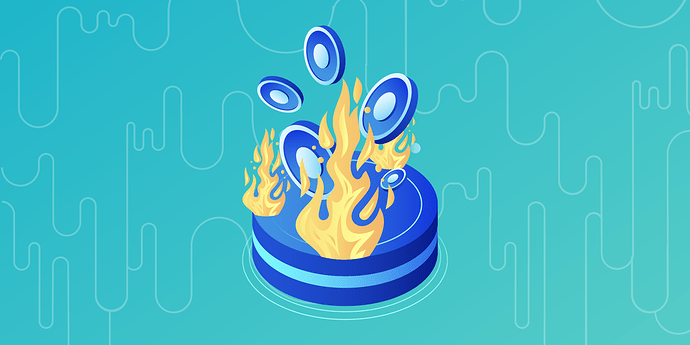 What is a Token Burn? How Crypto is Removed From Circulation - Decrypt

Burning tokens involves indefinitely removing a digital asset from circulation and reducing its supply. Here’s how it works.

I’m not fundamentally opposed to the burn concept.
It depends on how its implemented.
I’m open to deliberation on how or what type of burning.
I don’t know how I feel about “tx tax” based burning.

Tx tax is straight forward though. no big brain needed.
but otherwise where would we create burn that is value add, instead of net revenue negative (user/company)?

Actually now that I think about it there is a limited number of instances where burn could be applied;

Hans, What were your thoughts about implementation

one idea is ;
If we learn about the true rates the team gets paid per store or the net average rate per store it allows a burn based on revenue inflow. this is a positive for holders, but a negative for team.
If team is offering a max of 20% cashback for diamond on Ebay, but earns 25% always, then they 5% profit margin.
This is the lowest profit they would make, So they would - on average - make higher margins with lower tier users, which are more likely to be the normal users as the tiers are easier to acquire.

So if we enforce a 2.5% burn on net revenue per store , there would still be profit/margin available.
The problem with this is it hurts cash flow to the team, and requires buybacks as they are most likely paid in fiat.

I’m going to list how I view this scenario:

Like we got into this situation where instead of the company doing buybacks for their product they run the treasury down (potential for mismanagement) and propose the vote to keep the product alive by increasing the supply for 25% and essentially killing the buybacks.
We decided to increase through a community vote but we didn’t ask anything in return which IMO is from our estandpoint an investor a somewhat poor performance tbh(subject to personal opinion ofc).
I just feel like we should have negotiated a way in which we agree to this proposal but ask something in return like a demand and that demand being something along the lines
Invest a small % of total earnings on a monthly or quarterly basis that would buy back tokens off the market and burn it to reduce supply over time to the original token supply.

Since the % is related to the company success the current amount would be small in $ terms but as the company grows it would increase while also showing respect to the community for taking a hit in rough times.

Do you feel that would be the best use of company assets for supporting the token price? What if the $ used for burn could be used for marketing or user acquisition? Would you be willing to trade user growth for a decreased supply of the token to increase token price? What if increased user growth produced an increased demand (instead of a decreased supply) and the token price ends up at the same point? I understand what you’re saying, but I question if the tradeoffs are worth it. The ideal outcome for me would be a killer marketing and growth plan for StormX, and if that happens, I’d dislike the idea of diverting revenue from StormX towards burn from potential growth. I’d be more in favor of a burn if StormX had no better use for the money.

So my proposal is similar to when you provide a loan to somebody and you don’t expect it instantly back but rather in smaller increments over an extended period of time.
We diluted the token without having no exact idea what the growth pool look like(teeam still silent), no GTD about APY for the famous staking and GTD that staking will die out. Not to mention the sketchy mismanagement of the treasury and the unwillingness to shed any light on this topics.

Now all your questions are more then fair(and for the record I asked some of them myself) but it’s based on a lot of WHAT IF and personally with the latest development:

I’m probably more then ever skeptical about WHAT IF and more let’s try to hedge this decision somehow which is why I wrote above the example with the loan.